There is the unmistakable sense that they- the artists- occupy a consciousness that transcends race consciousness.  See, when you’re from the future, your possibilities are vast.  When you’re in the now, your potential is contingent and relational to the whims of hegemony.   We might have arrived here by slave ship, but that doesn’t mean we can’t board a space shuttle and leave. (link)

I’ve been thinking about why Afro-Futurism appeals to me so much.  As an African-American woman who studied pre and post-colonial history, I am acutely aware of the state of things.  My previous post on afro-futurism entitled “On Afro-Futurism: Or I’m a Black Woman From the Future” explained what it is, but not what it means to me.

I saw this snippet of the lyrics of Janelle Monae’s “BaBopByeYa:”

“I see beyond tomorrow

This life of strife and sorrow

My freedom calls and I must go”

Here’s a video with the audio:

The post entitled On “Black Love:” Or Why I Do Not Find It Exceptional I wrote two days ago explored freedom from the mores of “Blackness.”  The particularity and insularity of “Blackness” in African-American social circles has always struck me as confining.  I never conformed to the markers of “blackness.”  This was both a matter of class and socialization.  Having grown up in a very multi-cultural setting, I was never socialized to accept the essentialist understandings of “blackness” based on a common struggle (with a hint of defeatism or fatalism).  The same policers of “blackness” were the ones citing the “Willie Lynch” speech (despite it being discredited as a hoax by several historians over the last 30 years.)  In fact, the same person who insinuated that my membership in a majority-white sorority negated my “blackness” cited “Willie Lynch” as a reason for Black pathologies.  When I gave her the evidence to the contrary, she refused to acknowledge my argument, dismissing it as spurious, while saying “it’s the principle.  White slave owners did that to our ancestors.”  Why is it acceptable to cling to historical falsehoods and hoaxes to explain these so-called Black pathologies (as though they are particular to Black American descendants of slaves!)

I’m working very hard to NOT be invested in divesting the shackles of the societal construction of “blackness.”  It began well before I cut off my permed hair at the end of Freshman year of college and began to care for my natural hair.  Even in middle school, I defied my peers’ racialized expectations of me and questioned convention at every turn.  See, when you’re born like me- hearing-impaired, unable to speak until age 3, gifted in underappreciated skillsets, you learn very early on to question everything.  In a society that does not value my talent, I see very clearly how I am marginalized.

I think I have summed up my frustration pretty well.  Now we get to the meat of the issue: 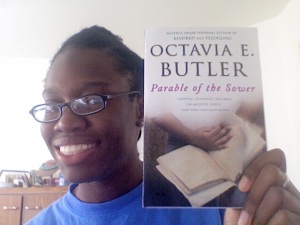 I’ve just begun reading Octavia Butler’s “Parable of the Sower.”  The book addresses environmental and economic crises in a seemingly dystopic future.  The description makes it clear that chaos has reached even the “upper echelon” (I detest the hierarchical nature of the language of class) of society.  The gated communities are engulfed in “fire and death.”

Frankly, beside The Parable of the Sower’s protagonist, Lauren Olamina, I can only think of 5-6 examples of non-whites in science fiction who survive beyond the first episode or chapter: I readily admit that I am not well-read.  From my cursory knowledge of science fiction, it doesn’t seem that people of color are ever prepared for a dystopic future.  The future I see in science fiction is largely composed of aliens  as “the other” and whites as the “default” human.  It seems that the alien has always served as a convenient “other” while people of color perish.