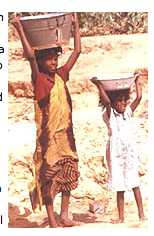 Slavery is forced labor or exploitation with little to no pay (beyond subsistence) as a result of force, fraud or manipulation. Human trafficking (often called modern-day slavery) usually involves the added elements of recruitment, transportation and receipt of trafficking victims with the intent of exploitation. Slavery does not necessarily involve the trafficking of a person, but it does involve exploitation, forced labor, exploitation, abuse and slavery-like conditions. A person is a victim of trafficking if he or she has been moved within a country or to another country as a result of force, fraud or manipulation and is exploited or made to work as a slave. It is estimated that there are over 27 million slaves today worldwide and they are exploited in many forms including: forced labor, forced begging, sexual exploitation, forced marriage and the sale of body parts.

The Mauritanian government, under President Mohamed Ould Abdel Aziz, has recently announced measures to regulate the working conditions of domestic servants and workers within the country‘s borders. However, approximately 20 percent (well over half a million) of Mauritania‘s population remains enslaved particularly in the domestic and agricultural sectors. Mauritania has failed to fully abolish slavery within its borders, in spite of repeated passages of laws abolishing the slave trade in the years 1905, 1981 and 2007.

The August 2007 law finally made owning slaves a criminal offense.  According to the United States, State Department Trafficking in Persons Report, Mauritania is a source and destination country for children trafficked for the purpose of forced labor and sexual exploitation. The practice of slavery in Mauritania, which dates back to the 8th century, is rooted in traditional, ancestral master-slave relationships.

Slaves in Mauritania do not have a legal right to own property, let alone have a surname. Nor do they have a right to custody of their children. The 2007 law criminalizing the ownership of slaves was received with resistance and scoffing. The director of the Mauritanian government‘s Human Right Commission, Bamariam Koita even defended the fact that as of yet, no one had been prosecuted under the law. He argued that there are no chains and slave markets, and 1981 law that abolished slavery invalidates any argument that slavery exists in Mauritania. However, Mr. Koita painted a simplistic picture of slavery. In the 2007 article entitled „Slavery Past and Present,“ one man, Mohamed- he gave no surname because he was a slave- countered the director‘s statements by listing the members of his family who were enslaved. A slave‘s chains are socio-economic and generational in nature. The fact remains that a centuries-old tradition of master-slave relations whereby the dominant „white Moors“ (or Arabs) exist in superior positions to the Black Africans who lived in intergenerational slavery bolstered by undereducation and economic disenfranchisement.

Anti-slavery groups in Mauritania include El Hor (translated from the Arabic as “free man”), In’itaq (translated as “emancipation”) and SOS Esclaves (“SOS Slaves” in French). El  Hor is a group of ‚harratin‘ or freedmen, former slaves of Mauritania‘s elite ruling class. Founded in the late 1970s, they have campaigned for the abolition of slavery and against its continued existence. There has been some progress in the campaign to criminalize and end slavery. In January 2011, three women were convicted of keeping two girls in slavery-like conditions. However, a month before, six anti-slavery activists were arrested by the Mauritanian police for publicly protesting the continued existence of slavery and the discrimination against former slaves- and specifically calling for the emancipation of two girls, ages 9 and 13, trapped in domestic slavery.

The challenge here is to provide the survivors of both traditional slavery and trafficking sustainable emancipation. Mauritania‘s already-stratified caste system, coupled with rampant discrimination against freedmen and widespread acceptance of slavery makes this challenging. The challenges of undereducation and lack of money or skills might make it difficult for a ‚harratin‘ to be truly emancipated. We must go beyond passing laws that abolish and crimininalize slavery and trafficking laws to enforcing them and creating safe spaces for the victims of these crimes, where they can access resources specific to their needs. This does not just apply to Mauritania, as there are women, men and children enslaved and trafficked all over the African continent.

For more information on slavery and human-trafficking read:

Recent publications on the topic: